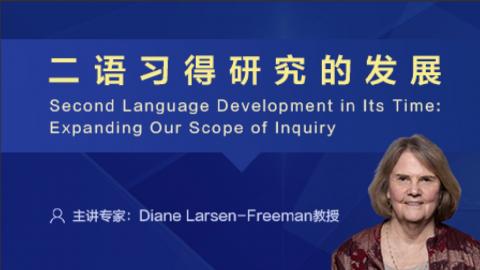 Diane Larsen-Freeman is Professor Emerita of Education, Professor Emerita of Linguistics, and Research Scientist Emerita at the English Language Institute, University of Michigan, Ann Arbor. She also served as the Director of the ELI from 2002-2008. In addition, she is a Professor Emerita at the Graduate SIT Institute in Brattleboro, Vermont and a Visiting Senior Fellow at the University of Pennsylvania. Her books include An Introduction to Second Language Acquisition Research (Longman Publishing, 1991, with Michael Long), the third edition of The Grammar Book: Form, Meaning, and Use for English Language Teachers (National Geographic Learning, 2015, with Marianne Celce-Murcia), and the third edition of Techniques and Principles in Language Teaching (Oxford University Press, 2011, with Marti Anderson). In 2003, she published Teaching Language: From Grammar to Grammaring. Another book, entitled Complex Systems and Applied Linguistics (Oxford University Press, 2008), which she co-authored with Lynne Cameron, was a winner of the Kenneth Mildenberger Book Prize, awarded by the Modern Language Association. Dr. Larsen-Freeman edited the journal Language Learning for five years, and until recently, served as Chair of its Board of Directors. In 2009, she received an Honorary Doctoral Degree in Humanities from the Hellenic American University, and in 2011 the American Association for Applied Linguistics bestowed upon her its highest honor: The Distinguished Scholarship and Service Award.